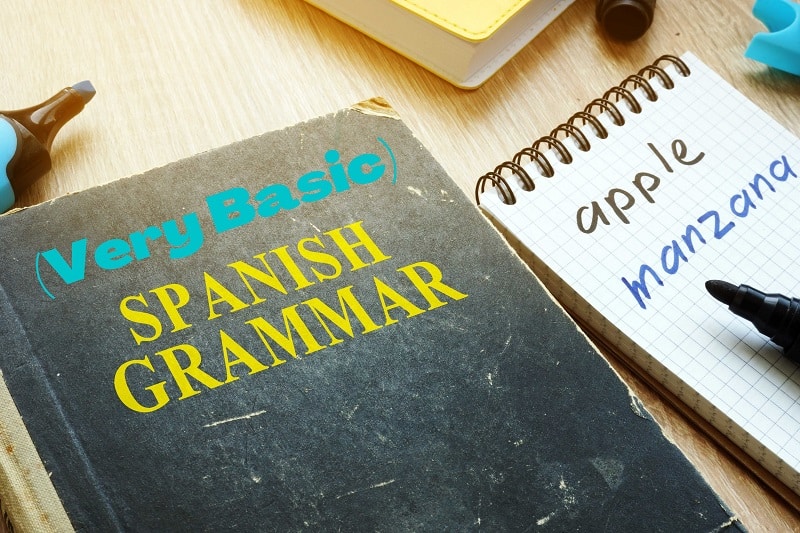 This won’t be a complete review of Spanish grammar.

That would take too long. 🙂

But this is kind of an 80/20, giving you some of the most useful Spanish grammar info, without taking a ton of time.

After learning the basic Spanish grammar in this guide, you should have enough of a foundation to start improving your medical Spanish (which is the main purpose of this website).

Here are the basic rules:

The other thing about plural words in Spanish is that the articles (words like “a” and “the”) and the adjectives need to be plural if the noun they describe is plural.  This isn’t difficult, but it may seem weird at first since we don’t do that in English.

Here are a few examples (and there are more examples below in the “gender” section):

Note how the word for “the” needed to be pluralized along with the noun it accompanies.

Note how in Spanish, the adjective (in this case “big”, or “white”) also became plural along with the noun.

(Side note: If you’re having trouble pronouncing any of the words here, check out my Spanish pronunciation guide.)

Every noun in Spanish is either masculine or feminine.  So they have a “gender”.

This is true not only in Spanish, but in other Latin-based languages as well (Italian, French, Portuguese, and Romanian).

Here are a few examples of words ending in ‘O’ or ‘A’ that follow this “rule”:

It’s good if you remember that basic concept, but unfortunately there are many exceptions.

For most words that don’t follow the rule above, you’ll simply have to get gradually more familiar over time.

One common example of a noun breaking this rule that you should probably know is “mano” (“hand”), which is feminine.  So you would say “la mano” rather than “el mano”.

There are also some clusters of words that break the ‘O’ / ‘A’ rule.  One such group is words that end in “MA”, which are usually masculine.

Nouns that end in consonants don’t necessarily follow any gender rules, but there are some patterns you’ll notice over time.

For example, most words ending in ‘N’ are masculine.

Examples (I made these plural as well, for variety):

Many times, you won’t know the gender of a Spanish noun just from the spelling.  So you’ll just have to get more familiar over time.

But it’s helpful to at least know that nouns have a gender, and that sometimes you’ll have to change the spelling of the article (like “the”) or adjective you use with that noun.

Gender of Spanish Articles and Adjectives

In case it wasn’t clear from the examples above, here are the masculine and feminine, singular and plural versions of Spanish articles.

As I mentioned earlier, Spanish articles and adjectives adopt the gender of the noun they are referring to.

In practice this is fairly simple.  Basically, for articles or adjectives that end in ‘O’ or ‘A’, you’ll use the ‘O’ version with masculine nouns, and the ‘A’ version with feminine nouns.

Examples of how to use Spanish articles with varying gender and number:

Similarly, a Spanish adjective agrees in number and gender with the noun it modifies.

Here are a few other examples of common adjectives with masculine and feminine forms:

An adjective that doesn’t end in ‘O’ or ‘A’ may not change its spelling, regardless of the gender.

In summary, when an adjective ends in ‘O’ or ‘A’, try to match that ending to the gender of the noun the adjective describes.  Also add ‘S’ to the adjective if the noun it refers to is plural.

If the adjective doesn’t end in ‘O’ or ‘A’, don’t worry too much about the gender.  But still add ‘S’ or ‘ES’ to the adjective if the noun is plural.

While this doesn’t cover every scenario, you’ll be right most of the time if you apply these basic rules.

This is a potentially confusing topic, but let’s try to keep it very simple.

Any Spanish grammar textbook will address this topic, often in great detail.

Here, I’ll try to keep it very practical and brief.

“Ser” is an irregular verb, so it doesn’t follow the typical rules for spelling or conjugation.  Here’s how to conjugate “ser” in the present tense:

It’s often said that “ser” is used for more permanent conditions, and this is mostly true.  For example:

Notice that in each of these examples, a condition that is permanent (or sort of permanent) was described with a form of “ser” (“es”, “soy”, “es”).

What else is “ser” used for?

“Ser” is also used to report an action that takes place, like “the mail is delivered”.

You’ll pick up some other nuances about “ser” as time goes on, but that should help with the most common usages.

“Estar” is also a little bit irregular, but not as much as “ser”.  Here’s how you conjugate “estar” in the present tense:

In some ways, the way you use “estar” is basically the opposite of how you use “ser”.

Note that each of these is a transient condition that could change at any time.  If you remember to use estar for conditions that are not permanent, you’ll get it right most of the time.

One example of this was already given when we said, “La puerta está cerrada”, meaning the door is currently closed.

Another use of “estar” is to tell someone’s or something’s location.  This may be intuitively obvious from the explanation already provided, since location is usually a transient (not permanent) condition.

Since there is usually at least one exception to every rule, we should note that “ser” is used to tell the location of a meeting or event:

In other words, it may be 80% of what you need to know about when to use each one, at least in a medical context.

“Por” and “para” form another pair of words that are often discussed together.  And that’s because  both of them can be used to translate the English word “for”, in different contexts.

Here’s a simplified breakdown of their uses:

So it often means things like “for that reason”, “for [or on behalf of] so-and-so”, etc.

That should give you a basic idea of how to use “por”.  If you remember that it usually means “because of” or “on behalf of”, you’ll probably grasp the meaning more often than not.

Para can also mean “for”, and often denotes a recipient.  It’s also used with verbs to say “in order to ____”.

That covers the most common scenarios you’ll need to know.

If you remember that “para” usually designates the recipient of something, or is used with a verb to say “in order to ___”, you’ll be off to a good start.

Other Resources to Improve your Basic Spanish

None of the grammar lessons in this article are comprehensive. And they’re not meant to be.

Instead, they’re just enough to give you a little bit of a foundation. And hopefully they provide some context to the words and phrases you learn as you’re improving your medical Spanish.

If you want to go more in-depth, and get a better understanding of Spanish grammar, there are various other resources that can help.

You could start with a beginner Spanish grammar book, and maybe try using an app, podcast, or website as well.

Any of those can be helpful, but it’s best if you use a combination of different resources to help engage all of your senses. The more senses (audio, visual, etc.) you use, the faster you’ll learn and the more you’ll remember.

With the info in this guide, you can get a solid start on basic Spanish grammar.

It’s fairly brief, but gives you kind of an 80/20.  In other words, it’s the most important 20% or so of basic Spanish grammar, and learning this much may give you about 80% of the results.

If you’re looking for “high yield” info, you’re in the right place. 🙂

If you want to improve your basic Spanish skills even further, check out some of the resources that I linked to in the section just above.

While learning medical Spanish is the ultimate goal, it really helps to learn at least a few fundamentals of the Spanish language beforehand.

By doing that, you’ll understand more of the context in the medical Spanish phrases you learn.

If you found this info helpful, please share it with someone you know who can benefit!