How to Relearn Any Language Quickly [My Return to Thailand] 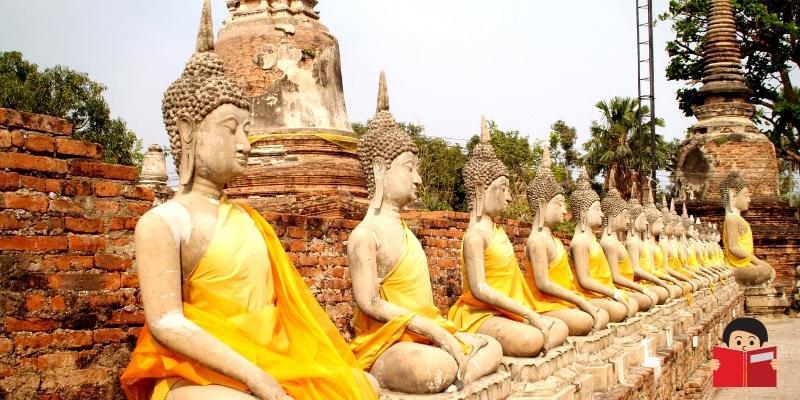 Perhaps you studied Spanish in school. But then you stopped using it, and got rusty.

Or maybe you traveled somewhere years ago, learned the language a bit, but never practiced afterwards.

Whatever the reason, you may wanna know the best way to relearn Spanish, French, or another language.

Today I’ll share some tips about how to relearn a language, using principles derived from my 2nd trip to Thailand.

Regardless of what language you need to refresh, I think the advice here will help!

Back in 2017, I went on my first trip to Thailand and stayed for about 3 weeks. While I was there, I tried to learn the language quickly, and became ever-so-slightly competent.

I learned several common words and phrases, and could carry on a very simple conversation with passable pronunciation. I even got quite a few compliments from native speakers (probably because so few visitors bother to learn more than five words in their language).

Then I completely ignored the Thai language for a year.

I didn’t know if/when I would go back to Thailand, so it didn’t seem worth putting much effort into it until that time came.

It happened somewhat-spontaneously, when I arranged a trip to both Taiwan and Thailand just a couple weeks beforehand, after considering various potential destinations in Asia.

(I chose Asia because I was working night shifts in the US and could theoretically keep the same sleep schedule during my trip. As a bonus, I’d get some morning sunlight for a change.)

I spent three days Taiwan, and then about 10 days in Thailand.

While in Taiwan, I dabbled in Mandarin Chinese a bit. I learned how to count to infinity (haha), and about 20 other words/phrases that were useful for greetings, buying things, and other very basic conversation.

My Taiwanese friend taught me a way to say “see you later” which very consistently got smiles and laughs as I left restaurants or shops.

Back In Thailand for About 10 Days

After that I flew to Thailand.  In addition to the delicious food, beautiful sights, wonderful visits with friends, and other adventures, I also re-engaged with the Thai language.

Allow me to summarize for you how that how that went, and what I learned in the process.

As a result of my three-day foray into Chinese, I didn’t start reviewing Thai until the day I flew to Bangkok.  Up until I started reviewing, it seemed I had forgotten nearly everything I learned the year before. I could basically only remember how to say “hi”, “how are you”, “bathroom”, and a couple numbers.

But within an-hour-or-so of starting to review (with my notebook of words and phrases from the previous trip), as if by magic, I jumped from about 1% to about 30% of what I’d previously known.  It was almost as though I could feel those neurons tangibly reconnecting after lying dormant for a year.

Then, more gradually, over the next 5-7 days I was able to reach about the same level of proficiency I had the year before.

in the remaining 3-5 days I further improved by:

Don’t get me wrong, I’m still very limited with the Thai language–learning Thai is hard!  Many Thai sounds don’t quite exist in English, and using tones is a completely foreign concept (literally and otherwise).

Furthermore, I have to keep conversations to a limited set of topics or I’ll get completely lost.  But even so, the seemingly small improvements I made had a big impact on my ability to communicate, making conversations more fun and diverse.

Some notable events that showed my progress:

On several occasions during my last few days in Thailand, I had fairly fluid conversations with native speakers that lasted a few minutes or more, without going off the rails.  That was pretty much unprecedented.

Incredibly (and possibly insanely), I spent the bulk of two days traveling with a native Thai speaker who barely knows any English (perhaps comparable to Junior High level Spanish in the US).

Despite this language barrier, we were able to make plans together, talk about what to do next, and sort of make small talk for extended periods of time.  It definitely involved a lot of improvised sign language as well, but I probably couldn’t have communicated as well a year ago.

The Thai people also were increasingly emphatic–and even superlative–in complementing my speaking ability.

As I’ve mentioned before, you could argue it doesn’t take much for Thai people to be impressed with your language skills, because so few people even try to speak their language (despite the innumerable tourists).  But it still feels nice to make them smile, connect a little bit, and then hear them say that you speak “incredibly well”, or something to that effect:

How to Relearn a Language – 5 Keys to Success

So after blathering on about my experience, what can you actually take from this?

Well, whether you’re learning Thai, Spanish, or any other language, I think some of the same principles and techniques that I used can lead to rapid progress.  Based on my return trip to Thailand, I’d say the keys to success are as follows:

I talked to many people in Thai every day.  Sometimes those were friends I was traveling with, but other times it was the food cart vendor, waitress, shopkeeper, or just random people on the street (or bus, or subway).

And if I had a “captive audience” for any reason, I usually took advantage.

2) Write down new words / phrases. Review them 2-3 times.  Practice at the next opportunity.

I kept a small notebook with me and jotted down words or phrases that seemed useful.  I reviewed the recent ones briefly most mornings and nights (this only takes a couple minutes).

Since they were still fresh in my mind, it was then fairly natural to use these words in a subsequent conversation–especially since they were common words to begin with.

3) Get good at saying very common things. Gradually expand from there.

I started each day (and most conversations) with basic greetings, things I already knew how to say pretty well. That way I gained some “small wins”, and built my confidence.

With that foundation in place, I gradually incorporated other topics depending on the length and purpose of the conversation.  As a result, my comfort zone expanded little by little, and I didn’t feel overwhelmed.

Watch out for words and phrases you keep wishing you knew how to say. Learn some of those each day.

When I found myself with someone bilingual enough to understand, I would ask them how to say one or two of the words or phrases I’d been wishing I knew, and carefully write these down (including the tones).

I reviewed the new words soon after, at least a couple times, and tried to use them in a sentence at the next opportunity.  I also tried to notice when other people used those words in conversation.

5) Have fun!  Learn words you can use to joke around or be playful.

A lot of the words I’ve learned in Thai are useful for banter (though some of the same words are practical as well).

This was intentional, as I found myself wanting to say things like “maybe”, “a little bit”, “just kidding”, “funny”, “really?”, etc., to facilitate joking around.

You probably won’t learn that stuff from a textbook or an app. At least I didn’t.

And Maybe the Most Important Tip of All…

Notice any progress you make, even small, because learning a new language is a big deal!

Enjoy your newfound ability to connect (even slightly) with people from a different country or culture.

Enjoy the satisfaction when you’re able to have even a short conversation with no English words.

And if you’re in Thailand, enjoy the frequent and generous positive feedback from the locals as a result. 🙂

After my 1st trip to Thailand, I didn’t review the language at all because I wasn’t sure if or when I’d use it again.

Perhaps with only about 15 min/day of review and practice I can remember most of what I’ve learned and gradually build upon it.

Perhaps with that same amount of effort, targeted effectively, you can do the same, with Spanish or any other language.  So now it’s time for you, and for me, to figure out a plan and get started!

Relearning Spanish, Thai, or any other language can seem daunting. But it’s usually not as bad as it sounds.

Once you get started you build some momentum, and it gradually gets easier and more fun.

The best way to relearn a language is to put yourself out there and have fun with the process. Talk to people, build your confidence with small wins, and review regularly.

As a bonus, try to learn vocab that’s useful, or fun. (Or both.)

If you put these principle into practice, I think you’ll make faster progress that you ever expected!