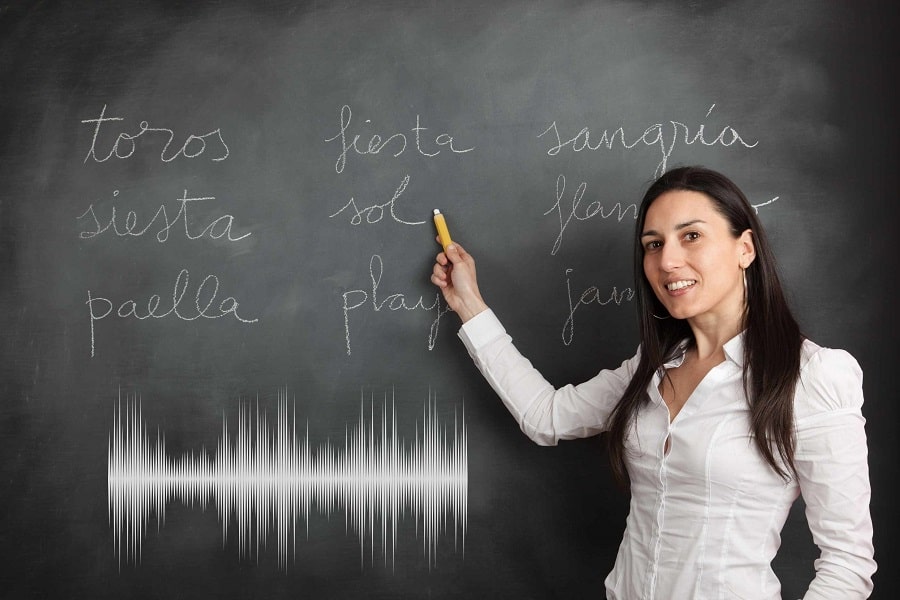 Today I’ll share with you some simple Spanish pronunciation rules.

With these tips, you should be able to improve your Spanish pronunciation quickly, perhaps in just a few minutes.

Pronouncing Spanish words correctly is the best way NOT to sound like a gringo.

It also makes it a lot easier for the natives to understand what you’re saying.

So it’s definitely worth the trouble to master the basics.

Start (or End) With This Video

A few years ago, I made a video explaining the most important Spanish pronunciation rules.

Of course, I had to leave out some details, since it’s only 10 min long. But the idea was to give you enough info that you could sound pretty good, even if all you know is what’s in the video.

Basically it’s the 80/20 rule applied to Spanish pronunciation: This is the 20% of the information that will get you 80% of the way (or more) to sounding like a native.

One effective way to learn is to read the text in this article either right before or right after you watch the video.  That way your mind is primed, and you’re basically reviewing what you just saw.

It’s basically the same info that’s covered in the video, so you can start with either one.

Ideally, use both this text AND the video, in succession, so you can review what you learn in a different format.

Here’s how my Spanish pronunciation guide is broken up:

Fortunately, Spanish pronunciation is pretty easy compared to other languages. So if you learn it once, and do a little practicing, you’ll be well on your way!

Spanish vowel sounds are pure, and never change. Keeping them consistently pure is one of your biggest steps towards sounding like a native speaker.

Learn these sounds correctly, and remember they’re always the same.

A good way you can practice the vowel sounds is to read out loud in slow motion. Hold each vowel sounds for an extra second as you go along, to make sure you’re making the right sound.

Group 2: Spanish Letters That Sound the Same as English

All of the letters below sound the same in Spanish as they do in English. Or at least close enough that if you pronounce them like English you’ll sound fine.

*B, V, and X have some minor differences from English, but it’s okay if you ignore those differences for now.  You’ll still sound good if you apply the other rules in this post.

Group 3:  Spanish Letters That Sound Almost the Same as English

You could “get by” saying these letters the way you do in English.

So it’s worth a minute to learn the difference.

When you pronounce the Spanish ‘T’, your tongue sits further forward, touching the upper teeth. And the sound is softer than in English.

Try this out with the words below, first the English version and then Spanish:

Similarly, your tongue will be further forward against your upper teeth.  The sound is shorter and less slurred compared to English.  Try it out:

As you practice, keep listening for those settle differences, and pay attention to what it feels like in your mouth.

These seven Spanish letters each have a specific, simple rule that you’ll need to memorize.

You probably already know some of these rules, so it shouldn’t take too long to learn the rest.

Q is always followed by a ‘U’, but sounds like ‘K’ (as opposed to the ‘KW’ sound which is more common in English).

Examples: corazón, nariz (both medical terms, by the way) 😉

In Spain, they pronounce it more like a ‘TH’, but not in Latin America.

Ñ sounds like ‘NY’ together.  You could replace the ‘Ñ’ in any Spanish word with ‘NY’ and it would sound the same.

These five “special” letters will take a bit more effort and practice to get right.

But the payoff is significant if you can use them correctly.

‘R’, ‘RR’, and ‘D’ in particular will go a long way to determining how much like a native speaker you sound (versus sounding like a gringo).

R sounds like one version of an English ‘D’, specifically the ‘D’ sound in words like “muddy” and “eddy”.  Say those words out loud a few times and pay attention to your tongue movement.

RR  is trilled.  I’m sure you’ve heard this sound before, but it isn’t always easy to replicate.

Basically it’s don’t by blowing air between the tip of your tongue and roof of your mouth.  If you’d like a more detailed explanation, there are many YouTube video tutorials on how to trill the ‘RR’.

Technically, ‘R’ is also trilled when it’s the first letter in a word (but never in the middle of a word), as in “rubio”.  But it’s ok to ignore this as a beginner  –  I did.

I think the best way to explain it is that it sounds kind of like a ‘TH’ in English, but not as breathy, with your tongue resting gently on your upper front teeth.

‘C’ and ‘G’ follow similar rules to each other, and they each have two sounds they can make.

It takes a little practice to get used to when you should use each sound. There are several little rules that help you know, and that’s why this section (and the next one) looks kind of long and tedious.

How do you know whether the ‘C’ is hard or soft?

C makes a hard sound when followed by a consonant, as in dirección.  Notice the first ‘C’ is hard, and the second ‘C’ is soft because it’s followed by a weak vowel, ‘I’.

How is the letter ‘G’ pronounced in Spanish?

Like ‘C’, a Spanish G is either “hard” or “soft” depending on what letter follows it.

G is also hard when followed by a consonant, as in sangre (blood).

But if ‘U’ is supposed to be pronounced after ‘G’, it will have two dots over it, like ‘Ü’.

And…that’s all the letters!

I know those last two were a little tricky. But try to keep it simple, and learn the basic difference between the hard and soft sounds they make.

Overall, with the information above, you’re well on your way to mastering the basics of Spanish pronunciation.

But there is one more topic that’s worth addressing: How do you know which syllable to stress in a Spanish word?

Knowing which syllable to stress in Spanish may seem confusing. But it can be broken down into three simple rules.

With these three rules you’ll always know what syllable to stress in any written Spanish word.

Keep in mind that in English, there aren’t any rules you can learn. When you learned English, you simply had to memorize what syllable to stress in every word. Kind of crazy, huh?

3 rules to always know what syllable to stress in Spanish

Rule 2:  If a word ends in any other consonant (besides ‘N’ or ‘S’), stress the last syllable.

Rule 3:  If the word has an accent mark, stress the syllable with the accent mark (and ignore the first two rules).  In other words, accent marks are there to tell you that the word doesn’t follow the other rules.

There you have it!

If you made it this far, you’ve learned all the basic rules of Spanish pronunciation.

As I mentioned earlier, I think a great way to practice is to read out loud in slow motion.

Hold the pure vowel sound an extra half-second to make sure you’re doing it right. And at the same time you can practice all the consonant sounds for good measure.

Refer back to the rules whenever you need to.  And try to avoid any slurring, as there is no Southern drawl in Spanish. 🙂

If you’re a total beginner, you might also check out my guide to very basic Spanish grammar.

It’s not as easy to “80/20” Spanish grammar as it is with pronunciation — grammar takes a lot longer to learn — but I did my best to give you very high yield info there as well!

And that’s the ultimate goal.