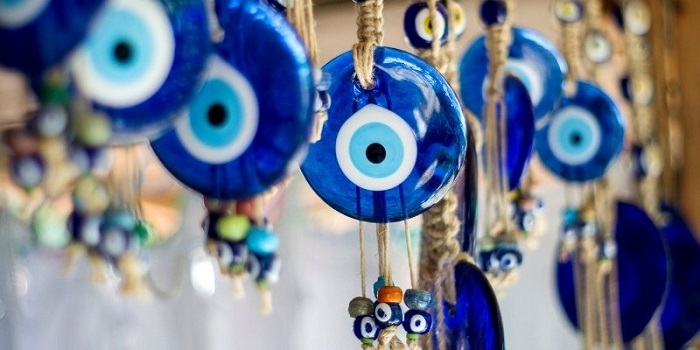 “Mal de Ojo” (occasionally “ojo malo”) is a Spanish phrase that’s most often translated as “evil eye”.  It could also be translated in other ways, such as “bad eye” or “sickness from the eye”.

Basically, Mal de Ojo refers to a supernatural belief that a jealous or envious glance can cause harm, especially to children.

The evil eye superstition exists in many parts of the world, most prominently Europe, the Middle East, and Latin America.

Today I’ll focus on the Mexican version of the belief, since that’s probably most relevant when learning about medical Spanish.

Evil eye dates back at least to ancient Greece, where drawings related to the evil eye were found on some drinking cups.

The Islamic prophet Muhammad also made a statement about evil eye, saying “the influence of the evil eye is a fact”.

Since then, the belief about evil eye has been most prominent in Western Asia, parts of Europe, and Latin America (including Mexico).

Basically, the Mexican version of the Mal de Ojo superstition is that an envious or jealous glance can impart negative energy to children, resulting in various problems for the child.

For example, it can cause the baby to cry, or to become sickly or ill. There’s a long list of potential symptoms, so basically anything that goes wrong could be attributed to the evil eye.

In the Mexican tradition, it’s helpful to have the person who gave the jealous look touch the baby, to kind of get rid of the negative energy.

A Mal de Ojo glance may not even be intentional, but can still have harmful effects.

In the video below, a Mexican woman (who appears to be a believer in the evil eye) explains her perspective on Mal de Ojo:

(She also goes on to explain her perspective on how astrological signs could influence the evil eye.  But the first part is a nice summary of Mal de Ojo.)

In Mexico, Mal de Ojo may also be viewed as affecting the hot cold balance of the child (the envious glance would be viewed as “hot”).

Getting Rid of Mal de Ojo (Evil Eye), to Protect Your Child

It seems the main method of getting rid of the harmful effects from Mal de Ojo Eye is to do a ritual, by passing a raw egg over the child to absorb the negative energy.

(There are some other variations out there, but that’s the one I saw most often as I was researching.)

Sometimes people use protective devices.  Most notably, a Mal de Ojo bracelet, amulet, or other jewelry item could be used to ward off the negative energy.

It may be helpful to be aware of the evil eye belief, since it could influence some of your patients from Mexico, or other Latin American countries.

For another Hispanic cultural topic, check out my post on El Empacho (stomach blockage).