The “Pain” of Learning Spanish, and How to Overcome it 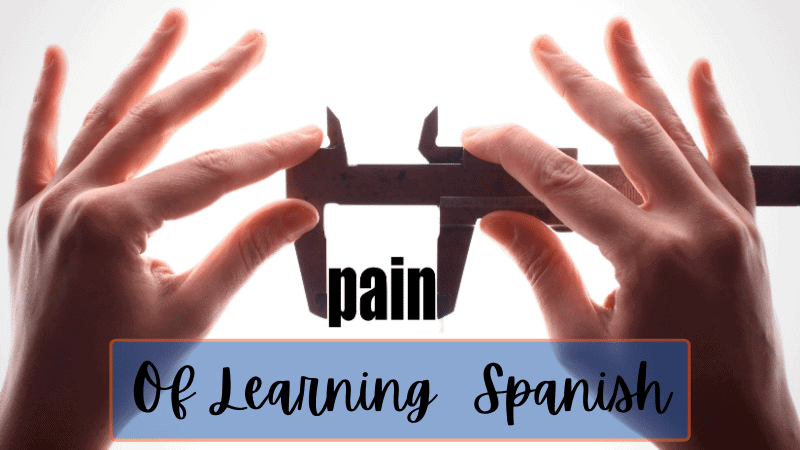 A lot of people say they want to learn another language.  Many have it on their bucket list.

Generally the time-table is something like “someday”, “one of these days”, or “when I finally find some time”.

Why do some people succeed at learning a new language when most people seem to give up or never really get started?

Are they geniuses?  Were they forced to learn at gunpoint?

Let’s explore some of the key factors involved in actually getting over the hump and learning a new language, along with what you can do to improve your chances.

Contents hide
1 Why Do People Learn a Language?
2 Why don’t most people who say they want to learn Spanish actually do it?
3 What’s your “pain scale” for learning Spanish?
4 How to Make the Odds (Forever) In Your Favor
5 Conclusion

Why Do People Learn a Language?

Let’s not ignore the most common example of why people learn languages:

They’re born into it.

When we were little babies, each of us felt frustrated at some point that we couldn’t communicate very much at all.  Whether we realized it or not, daily needs and desires arose and we wanted to tell someone about them.  This motivated us to pay a little more attention and try a little harder to remember new words.  We wouldn’t have tried so hard if we didn’t need those words to ask for food, a diaper change, or a warm blanket.

In many ways, this is similar to those people who “immerse” themselves in a language by traveling (or moving) to a foreign land without the safety net of a bilingual friend or interpreter.

Just like a child, the traveler starts by learning the words and phrases needed to meet his or her basic needs (such as when they get hungry or need a restroom).

Whether intentionally or not, people in the examples above were placed in situations where they had to learn a new language.  So they rose to the challenge, and they learned out of necessity.

This was similar to my experience when I move to Guatemala for two years at age 19. I basically had no choice but to learn Spanish, and that’s why I became fluent in a matter of just a few months.

Perhaps it’s not on the same level as getting dropped into the middle of Venezuela all alone, but a medical provider with a large majority of Spanish-speaking patients may feel almost a “necessity” to learn the language.

They can get by without it, but it’s inconvenient and sometimes ineffective.  They get tired of using less-than-ideal interpretation services from medical assistants or the patient’s family members, or spending several extra minutes using an interpreter over the phone.

There comes a point when the current practice is more painful than the alternative of learning the language, so they buckle down and learn it.

Another example of “almost necessity” is when you’re taking Spanish class in high school or college.  If grades are important to you, you feel the drive to learn at least the minimum to pass the class or get a decent grade.  The alternative (failing) is too painful, so even if you’re a procrastinator like most students, eventually you do what it takes.

Common Theme:  Which Course of Action is More Painful?

In each of the examples above, the pain involved in learning the language (or at least some minimum competency) was less than the pain of not doing so.   When not learning meant not getting food, failing a class, or repeatedly poor communication with patients, the pain was great enough that people took action.

Many other things can motivate people to learn a language.  But usually it involves a scenario where the pain of not learning is greater than the pain of learning.

Why don’t most people who say they want to learn Spanish actually do it?

Reason One:  They Are Sheltered From the Pain

In contrast to the scenarios above, most people who say they want to learn Spanish are sheltered from situations that would create a great need or overwhelming desire to actually do so.

For instance, many travelers to foreign lands bring someone who can interpret, choose destinations where most people speak their language, or stay in the touristy areas where many locals have been forced to learn enough English (or whatever language) to do business with visitors.

In the case of a medical provider, clinicians with mainly English-speaking patients won’t feel a great deal of pain or motivation to learn.  In addition, some hospitals (like where I used to work) have Spanish interpreters on-site at all hours, which certainly lessens (though doesn’t completely eliminate) the pain of caring for Spanish-speaking patients.

Another common example are the many immigrants who don’t speak the local language, but are sheltered within communities (the “Chinatowns” of the world) of people with similar backgrounds, and further aided by family and friends who can interpret when needed.

Many of these people are our patients.

For many, the very idea of learning Spanish seems daunting, overwhelming, or out of reach.  The pain of learning seems much greater than the pain of not learning.

If you’re reading this, you probably want to learn Spanish, but you likely have one or more things holding you back, as well.  Perhaps up until now you’ve found the pain of studying and practicing Spanish to be greater than the distress of not communicating directly with your Hispanic patients.

Your pain scale may be tilted a little, or tilted a lot, but it’s tilted away from learning.

Does that mean you’ll never learn? Let’s see what you can do to shift the balance.

How to Make the Odds (Forever) In Your Favor

Increase the Pain of Not Learning Spanish

How could you make it more painful not to learn?

Perhaps the most obvious way to make it painful not to learn is to immerse yourself by traveling to a Spanish-speaking country alone, or at least without anyone who will interpret for you.  And it works, as long as you get out of the touristy zones and actually talk to people.

This is a lot like what I did on my first trip to Thailand, when I tried to learn a (really difficult) language in about ten days.

As Michael Hyatt discusses in this blog post, one way to increase motivation for goals is to “expand your why”.   As in, why you want to achieve the goal.

Make a list of all the benefits of learning Spanish that you can think of, as well as the downside of “never getting around to it”.  Spend some time contemplating these lists and refer to them regularly.  This will have a dramatic impact on your motivation and impact both sides of the “pain scale”.

The same approach works well for physical fitness, saving money, or really any other category of goals.  Just think about how much more energetic and better looking you’ll be when you drop those pounds and go to the gym consistently… 🙂

Using either of the above methods, you can make it more painful not to learn Spanish.

Decrease the Pain of Learning Spanish

If you’re not ready to move to Mexico, never fear.  You can focus instead on finding a way to make the learning process less painful.  Here are a few suggestions:

Like most tasks, learning Spanish is probably less painful in real life than it is in your imagination.  Simply getting started with as little as ten minutes a day will create momentum and make you realize it’s not that painful of a process, and actually kind of fun.

Break It Into Bite-Size Chunks

Like any other project, it’ll seem simpler and easier when you break it down into individual steps.

Make a schedule for what you’ll do each day, or a few times per week.  Even those baby steps will move you along faster than you might expect.

Each daily step won’t be nearly as painful as you originally feared.

Having some kind of daily reminder greatly increases your chance of being consistent.  Some effective examples of how to use visual cues to track your progress are the paperclip method. and the “Seinfeld strategy”.

Myriad techniques can be employed, but the key is to have some type of reminder to keep you on track.

Convince Yourself That Learning Spanish is Relatively Easy (Because It Is)

Sometimes it helps if you take a step back and try to put things in perspective.

For example, when I tried learning Thai, I spent a lot of time and made a decent amount of progress. But afterwards I thought, “If I had spent the same amount of time and effort studying an easier language like Italian, I would practically be fluent by now!”

Okay, so maybe that’s a slight exaggeration. But hopefully you get the point.

If you spend a short time studying a really difficult language, even just enough to get an idea what it’s like….pretty soon you’ll soon be longing for the days of trying to learn a relatively easy language, like Spanish.

Spanish uses basically the same alphabet with English, has a bunch of similar words, and overall Spanish words are pretty easy to pronounce.

In contrast, some languages are much harder for an English speaker to learn. Like Japanese, Finnish, Arabic, German, or Russian, to name a few. All those languages have weird alphabets, weird pronunciation, or a combination of both.

Don’t believe me? Try reading this German article about “vagusnerv” stimulation and see how far you get. 😉

Perhaps the best way to make learning Spanish less painful and tilt the balance in your favor is to use a “shortcut”.

What kind of shortcut could you use?

A couple years ago I created a medical Spanish course for EM providers. This CME course uses a combination of video, audio, text, and a mobile app to teach you the most relevant words and phrases to help you communicate with your patients in Spanish from day one.

You’ll have the terminology you need to do a history and physical in Spanish, as well as explain basic assessments and plans to your patients.  This course is meant to be a huge shortcut to competence in caring for Spanish-speaking patients without an interpreter.

Unlike the other content on this website (including my strategy guide and resource list), naturally the course isn’t free.  But it’s a big enough time-saver that I think it’s worth the price.  And perhaps most importantly, it will dramatically decrease the pain of learning what you need to take care of your Spanish-speaking patients.

A lot of people say they want to learn Spanish, but most of them never do it. Fundamentally, they think it’s more painful to learn than NOT to learn.

There are several things you can do to shift the balance, and increase your chances of actually learning Spanish.

Among these are thinking about why you want to learn, taking baby steps, starting before you’re ready, or putting yourself in a place where you feel obligated to learn.

Sometimes it takes a few hacks, or changing your environment to really get things moving along.

Hopefully you found this article helpful, and if you did please share it with someone you know! 🙂