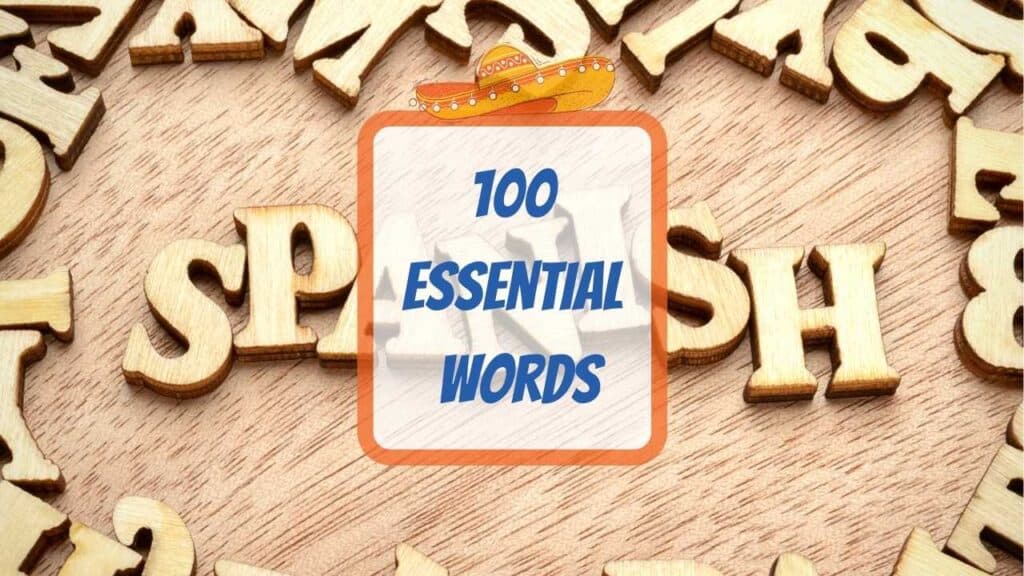 In this post, you’ll learn some of the most-used words in Spanish.

By learning a fairly small number of super-common words, you can majorly accelerate your progress with medical Spanish (and Spanish in general).

Obviously, you’ll want to learn a lot more than a hundred words, eventually.

But if you’re going to start somewhere, why not start with the most useful words?

Later, you can use a textbook, app, or other resources to add to your vocab.

Build a Foundation for Medical Spanish

Naturally, you’re here to improve your medical Spanish. That’s what this website is all about!

But learning some non-medical words is essential too.

Because they’re so common, these words will help give you the context you need to make sense out of other Spanish phrases you learn.

(Like the ones on my sore throat / URI cheat sheet.)

Let’s dive into the vocab.

Conjunctions connect other words and phrases together.

They’re ridiculously common, so you’ll get a huge bang for your buck by learning these.

(By the way, if you’re not sure how to pronounce any of these words, check out my Spanish pronunciation guide.)

*Que can mean “than” (like “bigger than..”), or “that”, (like “the dog that barks”), both of which are conjunctions.  It has other meanings too, but at the moment we’re focusing on how it’s used as a connecting word.

(A couple of the other conjunctions have additional meanings as well, but “que” is the most notable.)

If you take a few minutes to learn these, you’ll have a huge advantage moving forward.

Keep in mind that some Spanish prepositions (such as “de” and “en”) can serve the roles of more than one English preposition.  So keep an eye out for that.

*Notice “como” has already shown up on 2 lists, and it’s not done yet.  Some words have lots of different uses!

There are tons of Spanish verbs, more than you could ever learn.

But all the ones on this list are extremely common, and definitely worth your time.

Naturally, you also need to learn how to conjugate these verbs. I won’t cover that in this post, but you can look up any Spanish verb and see all the conjugations on this website.

My very basic Spanish grammar guide may also help (though not as much with the irregular verbs, which most of these are).

*You’ve probably noticed “gustar” is used indirectly for “to like”. For example, “me gusta” means “it pleases me”.

Like verbs, there are way too many Spanish nouns for you to ever learn all of them.

But some of them come up over and over (and over). So they’re worth learning early on.

Once you learn these nouns, you’ll start hearing them all over the place. So you’ll feel more confident, and better oriented in Spanish conversations.

Here are some additional words and phrases you can use to clarify details, or get a little bit more information.

These words are extremely useful in a medical setting, and definitely worth committing to memory.

(FYI, I also ended up sharing these phrases in a podcast episode, and in a YouTube video which you can find in this post about clarifying patient symptoms.)

There you have it, 100 essential Spanish words.

All of the Spanish words and phrases on this page are worth your time, and a good idea to commit to memory. (Even thought they’re not medical terminology.)

If you need to, make some flash cards.  Or just keep referring back to this list.

You could also try printing out this post, if that helps.  Or take a screenshot.

Whatever it takes, it’s worth your effort to learn the most common Spanish words.

If you do that, you’ll have the context you need to be oriented next time you’re using Spanish in a medical setting.